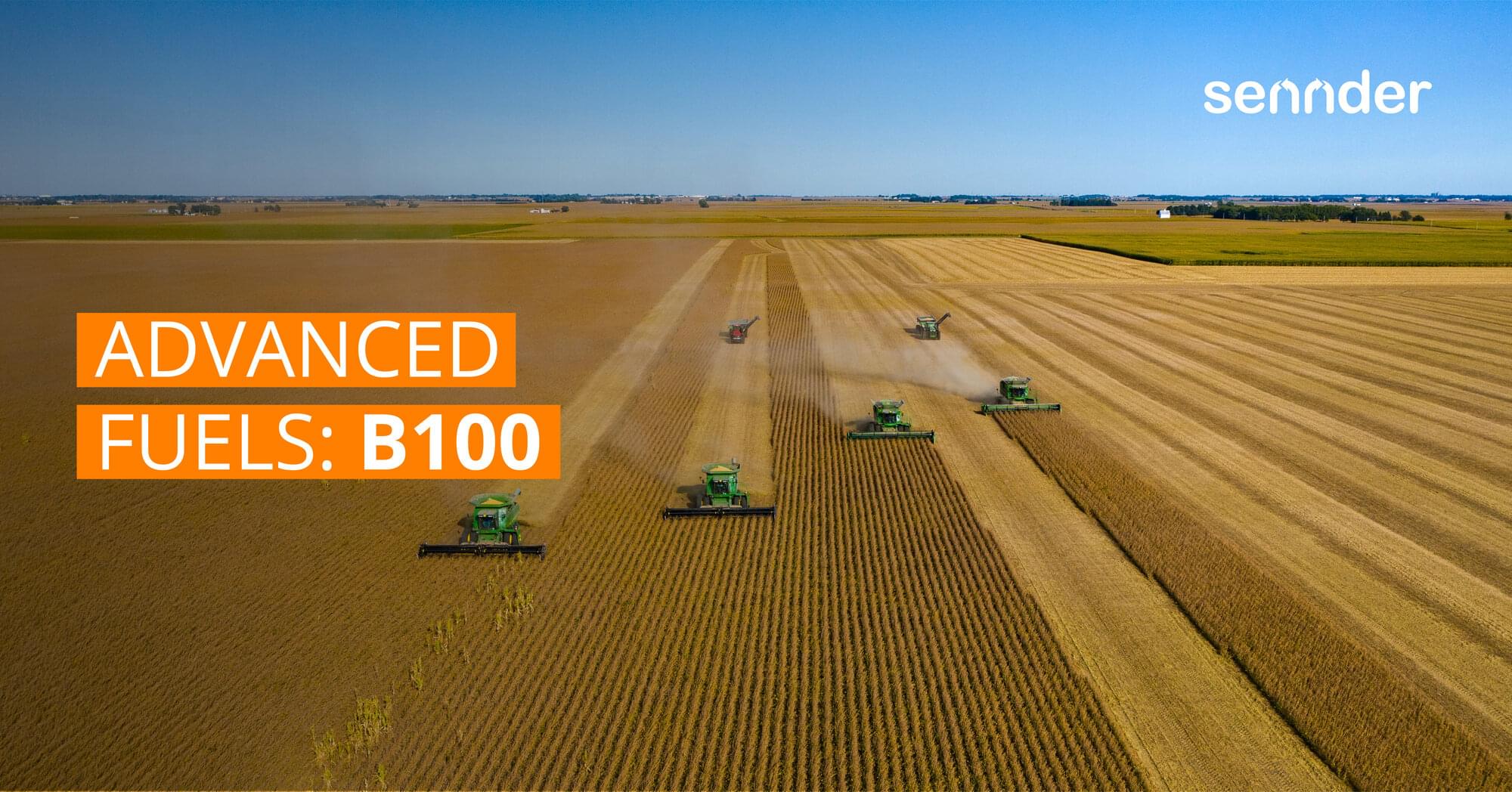 If you drive a truck in Europe, you probably already use biodiesel...you just don’t realize it. That’s because fuel signage at gas stations can be confusing. B7, B100? So many numbers, so little time! Which one can you put in your diesel truck today, and what might require a few slight engine adjustments? Which one reduces carbon emissions the most? Read on to find out.

The major advantages of B100 are that it can be produced from 100% renewable resources and that it significantly reduces carbon emissions. “Renewable” resources are green sources like food waste or vegetable oils. Fossil fuels, on the other hand, are non-renewable. Once they’re used, they’re gone, and their emissions stay in the atmosphere and cause climate change.

B100’s big selling point is that it contains 0% fossil fuels, guaranteed. It is pure, 100% biodiesel. It’s the first generation of biodiesel and is usually produced from vegetable oils. In the United States, the majority of biodiesel is produced from soybean oil, whereas in Europe, it is commonly produced from rapeseed oil. Sometimes B100 is referred to as FAME, which stands for the chemical composition of the fuel: Fatty Acid Methyl Esters.

B100 is a cost-effective, low-carbon alternative to fossil diesel

B100 is a cost-effective way to reduce carbon emissions with few modifications to existing diesel vehicles. The standard emissions reduction value for B100 provided by the GLEC Framework is 45%. That means that, on average, B100 achieves a 45% reduction in carbon emissions compared to fossil diesel. Some brands on the market today can get as high as 60%.

With B100, fleet owners and transport operators can effectively implement a carbon reduction strategy without needing to invest in entirely new vehicles or fuel infrastructure.

From B7 to B100: Biodiesel blends for low-carbon trucking

When you go to the fuel pump in Europe to fuel with diesel, you’ll see the B7 label. That’s because diesel sold in Europe must by law, consist of 7% biodiesel. In fact, the majority of diesel vehicles in Europe can run blends up to 20% biodiesel (B20) without any engine modifications.

Biodiesel can be mixed with fossil diesel in a variety of amounts. The table below, based on data from the European Committee For Standardization, shows possible mixes and their carbon reductions.

Challenges to implementing B100 at scale include required fleet upgrades

The main disadvantage of B100 is that many trucks require small engine modifications in order to use it. Running a diesel engine on B100 without these modifications can lead to extra maintenance needs - or it could even break the engine. These modifications are generally inexpensive. However, they do increase operational complexity for fleet operators and freight forwarding companies who want to offer pure biodiesel as a service.

Engine modifications are the main source of resistance to B100 thus far.

As a renewable diesel, B100 reduces carbon emissions and is good for the environment. Some companies and individuals worry that planting biodiesel feedstock crops competes with crops grown for food.

B100: A low carbon transition fuel

B100 is a fuel option that many fleet operators can implement immediately to reduce carbon emissions. Existing diesel engines require a few changes in order to run on B100. Many newer engines are already equipped to handle it.

The future of transport looks like a world powered by electric and hydrogen trucks. Until we arrive at that destination, renewable transition fuels like B100 can be a great option to reduce emissions today.