Blog How to save on fuel costs

How to save on fuel costs 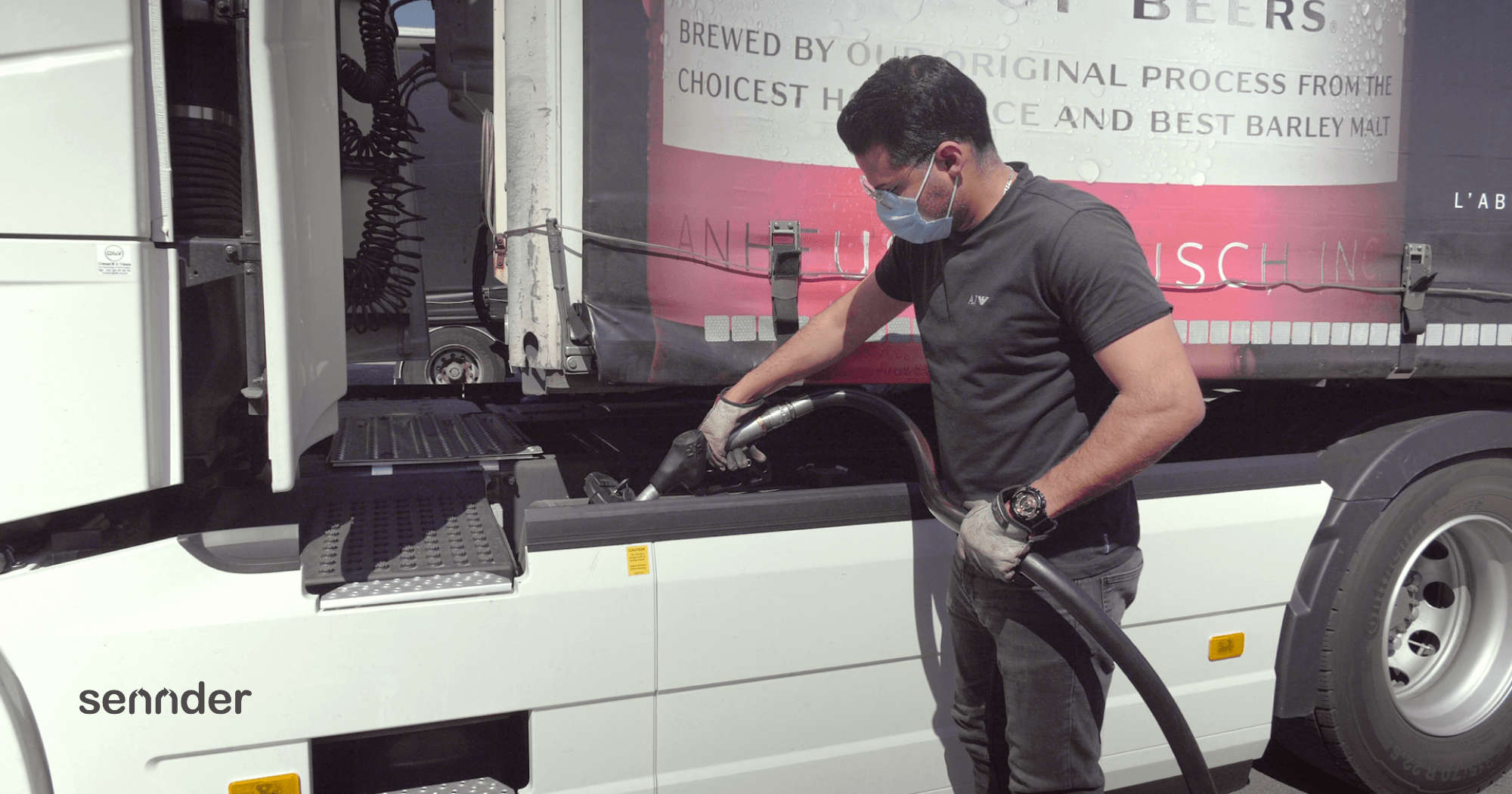 Gas and diesel fuel prices are generally more volatile than other commodities. This is especially true now, as Europe’s gas supplies will be directly impacted by recent sanctions against Russia. Since 2020, diesel prices in Europe have been steadily climbing, and in the past month, they have shot up significantly.

Fuel costs alone account for nearly one-third of a carrier's operating costs on average. So it’s clear that saving on fuel costs is a huge benefit to a carrier’s bottom line. 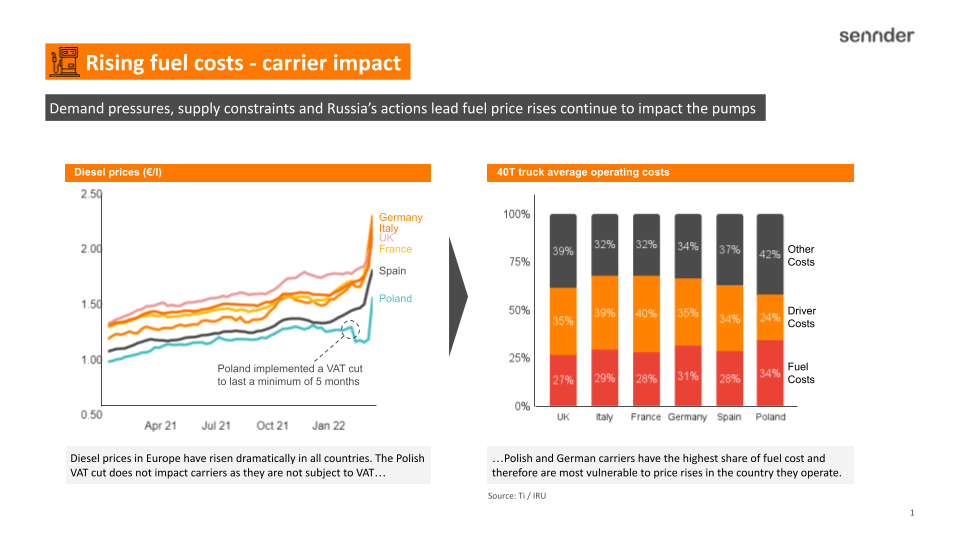 Beside switching to a completely electric powered fleet – which is prohibitively expensive for most small or medium trucking companies and has extensive delivery lead times – there is no way around buying fuel. However, finding small ways to save fuel can add up to significant savings pretty quickly.

Here are four tips to save on fuel costs.

Vehicles burn the most fuel when they accelerate, so maintaining a steady speed is one of the best ways to reduce fuel use on the road. This can be achieved by encouraging drivers to adopt a couple of fuel-efficient driving habits. Using cruise control on highways and maintaining road space in front of the truck while navigating city traffic are a couple of good habits to start with.

The heavier a load is, the more fuel is required to move it. So not overloading your trucks is also a good practice. Never exceed the permitted weight limit on your vehicles.

Beside the weight of the truck, the engine also fights against wind resistance, or drag. Trucks can be made more aerodynamic with the installation of angeled bumpers, sun visors, or fairings.

Also, consider air conditioning use. Research shows that air conditioning can increase fuel consumption by up to 10%. At speeds up to 80 kilometers per hour, it is typically more fuel efficient to roll the windows down and turn off the AC, when weather allows. At higher speeds, it's better to keep the windows up and use the AC, because the added wind resistance actually increases fuel use.

Some driving schools provide specialized courses for learning how to drive more fuel efficiently. Paying for drivers to attend such a course could be a wise investment, as it is likely to lead to savings on fuel costs in the long term.

As the point of contact between the truck and the road, tires play a significant role in a vehicle’s fuel consumption. The amount of pressure that a rolling tire applies to the road is called rolling resistance. Reducing this resistance can significantly increase your truck’s fuel efficiency.

Regularly checking tire pressures is the simplest way to improve your tires’ performance. Under-inflated tires significantly increase rolling resistance, and they cause unnecessary wear on the tires themselves. If in doubt, double check your tires’ optimum pressure, and make an effort to ensure that each tire is inflated to that level once each month.

Note that it’s equally important to ensure all of your tires are filled to the same bar reading, because uneven tire pressures will create an uneven weight distribution, which amounts to wasteful fuel use.

Next time you need to buy tires, look into fuel-efficient types. As opposed to the high-traction tires, fuel-efficient tires are designed to reduce rolling resistance while still providing enough traction for safe driving. Since tires naturally become smoother with wear, your tires’ fuel efficiency actually increases over time. For this reason, it is worth keeping your tires until the end of their life. That said, it is important to change tires when their tread has worn down to the end of its lifespan. In Europe the limit is generally considered to be a tread depth of 1.6mm, but local regulations may vary.

Carriers that work with sennder can take advantage of our partnership with Michelin and select from a customized suite of fuel-efficient tires. Michelin offers tires with low rolling resistance that are useful for both short and long-haul transport, and can save drivers up to 1.2 liters of fuel per 100 kilometers.

3. Avoid idling your fuel away

Perhaps the easiest way to save fuel is simply not to burn it when you don’t need to. Idling, or leaving a truck’s engine on when the truck is parked, quickly adds up to a significant amount of fuel being burned.

Here are a few quick facts about idling:

Truck drivers are likely to overlook their own idling, thinking that one truck’s idling costs are insignificant. But a liter of fuel here or there accumulates over time, and when multiplied across an estimated 6.2 million freight trucks in the EU, this amounts to an exorbitant fuel cost, as well as a significant cost to the environment and to peoples’ respiratory health.

Furthermore, most idling tends to occur when no business activity is happening, such as during driver breaks, at truck stops, in traffic, or while a truck is sitting at the dock. Idling often goes unchallenged by company leaders.

Reminding drivers to turn off their engines when they step out of their trucks, or creating a company policy to reduce idling times can add up to significant fuel cost savings. It will help your truck’s to get more life out of their engines as well.

4. Gain savings with a fuel card

Fuel cards, essentially credit cards that work only at fueling stations, are used by most carriers as a convenient way to allow their drivers to fuel up without using their own funds and to consolidate monthly fuel purchases into one or two payments. Many fuel cards also provide access to discounts on purchases, depending on the volume of fuel a carrier consumes.

At sennder, we provide access to two fuel card options – with DKV and with E100 – to all of our partnered carriers. Each of these options offer different benefits. 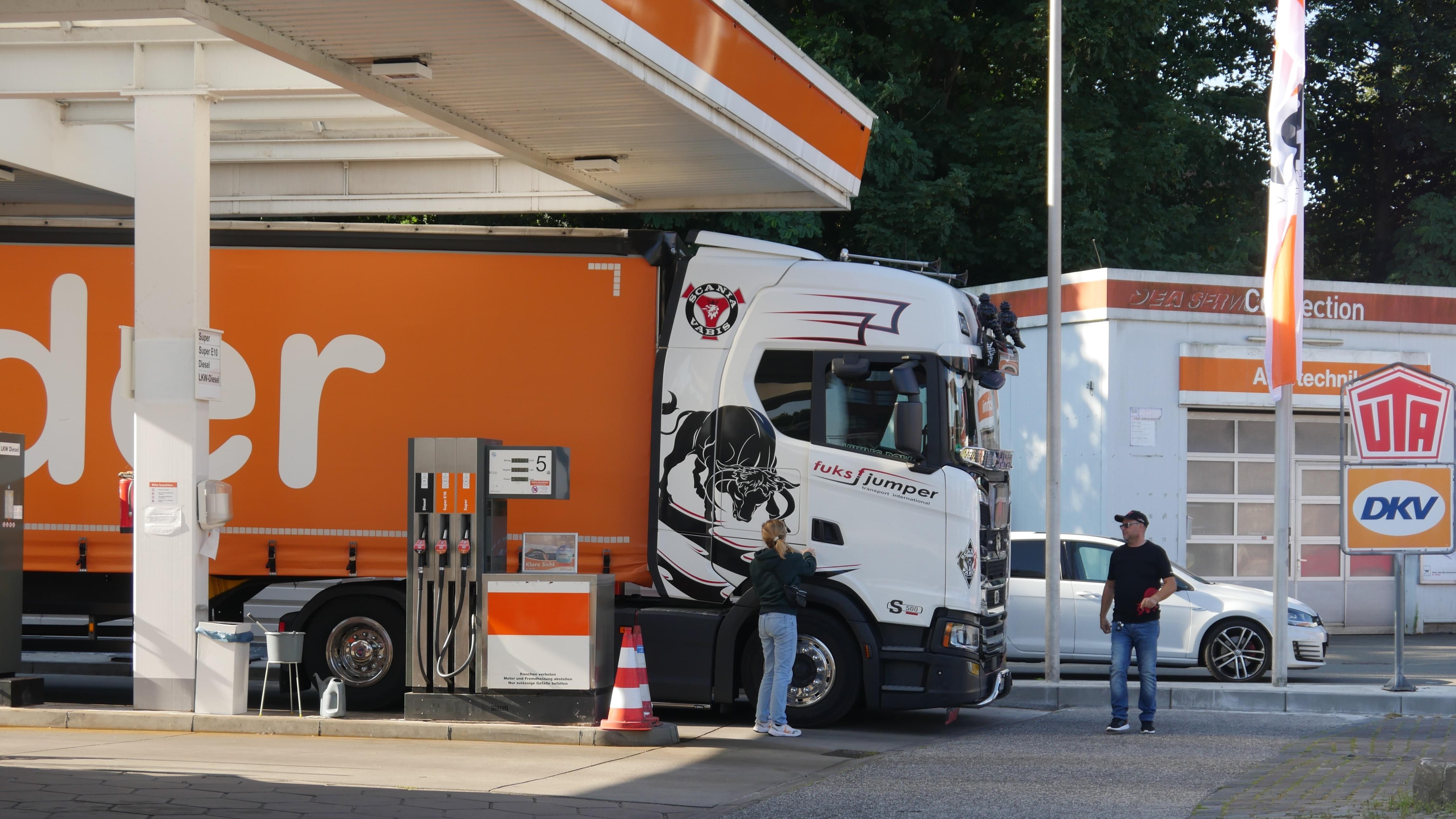 As with most fuel cards, these allow drivers to fuel up at any station within a vast network of stations across Europe, and carriers are billed for the fuel up to 21 days later. Fuel card holders also gain some added perks, such as discounts on tolls, and VAT and mineral oil tax return service.

The added bonus of using sennder’s fuel cards is that they grant access to better rates than one would earn with a small or medium fleet of trucks. By bundling the volume of all of our partnered carriers, we are able to pass on fuel savings that carriers can’t typically earn unless they have hundreds or thousands of trucks.