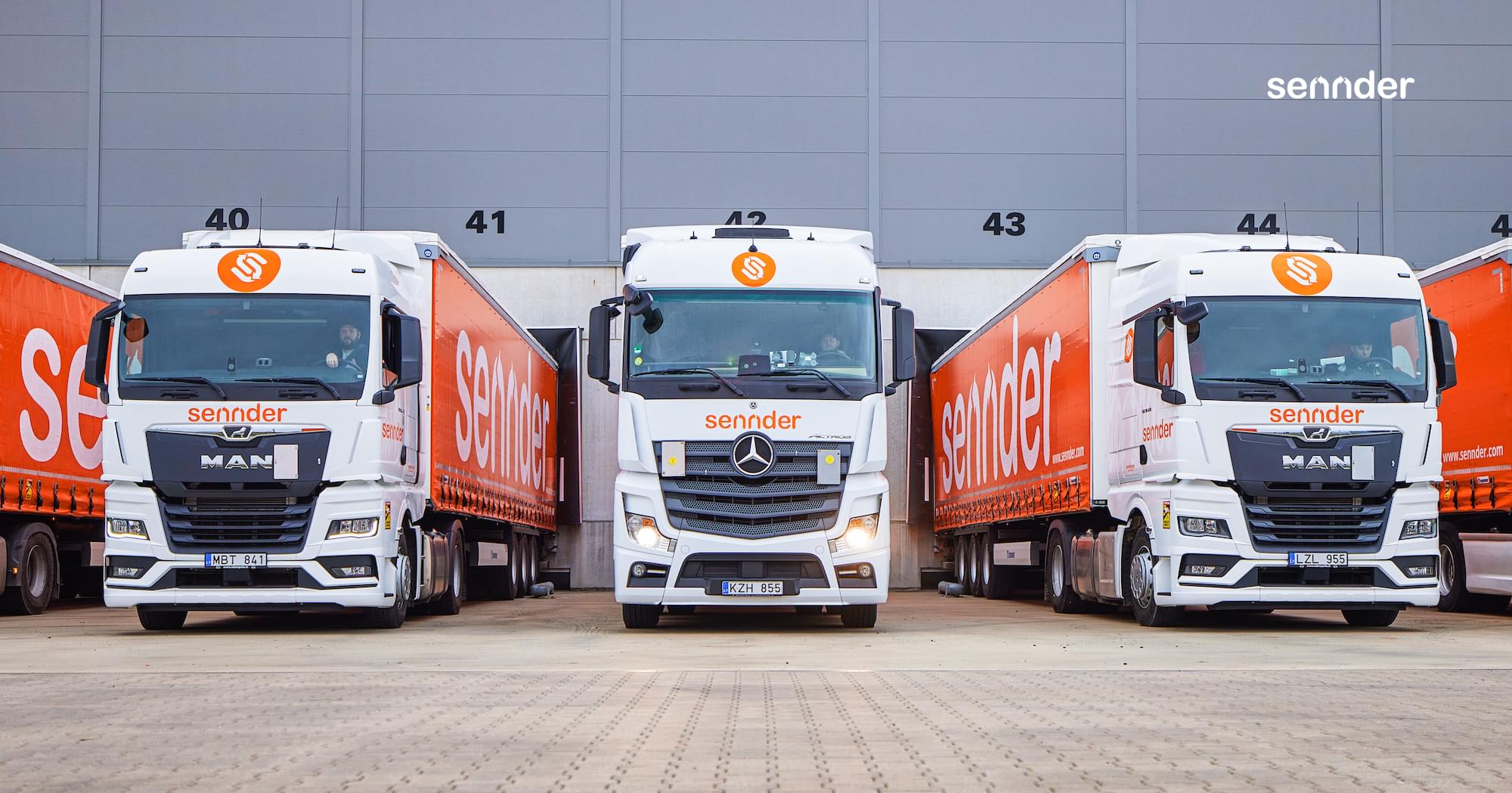 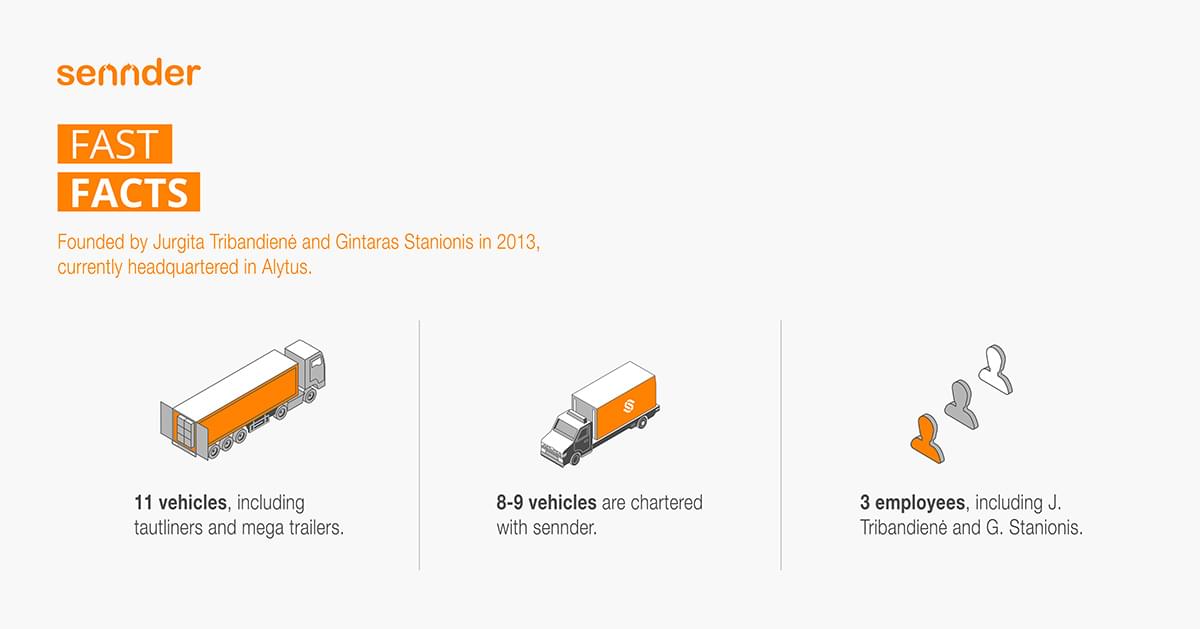 How UAB Rolavita got started

UAB Rolavita started out as a dream. Tribandiene and Stanionis were living in England at the time, but wanted to move back home. “We had heard that transport was a safe bet in Lithuania,” says Tribandiene. “It was the only thing that wasn’t going bust in 2013. And Gintaras has always loved trucks.” Gintaras had been working in England as a driver, so he knew the industry already.

The couple decided to take the leap. They bought a tautliner trailer in March 2013 and started servicing lanes between Lithuania and England.

“We were just constantly loading IKEA furniture,” remembers Stanionis. “Furniture, timber, and then all kinds of freight going back from England to Lithuania.”

They added round-trips between Germany and England around 2015. After growing their Lithuania-based business remotely from England for three years, they finally moved back to Lithuania in 2016.

Slowly but surely, Rolavita built up its fleet. When they bought their first truck, Stanionis was their only driver. Today they manage a fleet of eleven trucks, including tautliner trailers and mega trailers.

The benefits of working with sennder for carriers

Tribandiene and Stanionis discovered sennder by chance.They needed a load departing Lithuania and found a sennder order they liked on a freight exchange.

“Everything went very smoothly, from loading to unloading. We did a second load with sennder, and then a third, and a fourth,” recalls Tribandiene.

Additionally, they got along well with their sennder carrier manager, a major plus in an industry so dependent on personal relationships.

After six months of bidding on sennder loads, Rolavita started chartering in summer 2021, mainly carrying glass for Saint-Gonbain Autover from Estonia to Germany, France, Spain, Italy. It has revolutionized how they work. “At the moment, depending on the day, we’re chartering 80-90% of our fleet with sennder,” says Stanionis.

There are a number of reasons why Rolavita is chartering so much of their fleet with sennder. “It makes my job a lot easier,” says Tribandiene. “Before, I was in charge of searching for cargo, which is very difficult, and now I have time for other tasks.” Rolavita doesn’t have to hire additional employees because sennder’s carrier managers are, in effect, acting as those additional employees. “sennder’s people speak Russian, Lithuanian, and Latvian, which is really helpful and just a big relief,” says Stanionis. “At other digital freight forwarders, everyone only speaks English.”

Rolavita’s drivers are satisfied with the company’s chartering arrangement. “Some don’t want to drive at night, but we understand and work around that,” says Stanionis. “Chartering with sennder gives us enough room to adapt to the needs of both our company and our drivers.”

Has this ever happened with sennder? “Never,” says Tribandiene.

Good communication is essential to running a successful trucking company. Rolavita has found working with sennder to be extremely easy. “The processes are smooth, and we've never had any problems, nothing to complain or fight about,” says Tribandiene.

Stanionis agrees, adding, “She gets along very well with our carrier manager at sennder, Andris. Working with Andris means that Jurgita doesn’t have to coordinate all the drivers herself, which she used to have to do when we worked with other freight forwarders.”

sennder carrier managers communicate directly with drivers via the sennder Driver app. “I think it's better for the drivers themselves to get information first-hand,” says Tribandiene. “I may mishear and pass incorrect information to the driver, so it's always better when they communicate directly, and it makes my life easier. For example, if there's a problem at a loading or unloading place, the driver can contact sennder’s manager directly. sennder knows the situation better.”

In addition to the Driver app, Tribandiene and Stanionis also use orcas, sennder’s carrier platform. Says Tribandiene, “orcas allows us to upload documents instantly and get paid fast based on copies, not just originals. This is a big difference compared to other companies. It’s a big reason why we get paid faster when we work with sennder.”

In the transport industry, where cashflow is crucial, this is a big plus. “sennder pays when they say they will, and sometimes even earlier than that. We’ve worked with other companies that have paid us late or not at all. We’ve experienced nothing like that with sennder,” says Tribandiene.

There was a learning curve when they started using more digital tools, but ultimately they were won over by how much easier digitalization has made their day-to-day work.

Chartering with sennder has allowed Rolavita to expand geographically

When Tribandiene and Stanionis first started their business, they mostly worked in England. Now that they’re chartering their trucks with sennder, they have ventured further afield. “It was a real challenge for us at first,” admits Tribandiene. “Before sennder, we had never sent trucks to Italy, Spain, Sweden, Hungary or the Czech Republic. It seemed so difficult and we thought we wouldn’t be able to manage, but you grow a business by tackling challenges. Now we feel like we can carry freight anywhere, even the North Pole.”

There are certain key benefits associated with expanding beyond England. “We have a lot of foreign drivers from places like Belarus and Ukraine,” Stanionis explains. “Our drivers don’t need additional visas when they’re going to central Europe, which is a big help in terms of administrative costs. They also have fewer accidents, so our insurance costs have gone down. I wouldn’t charter my trucks with anyone else.”

The Lithuanian trucking sector is not without its challenges

Founding their company was a dream come true for Tribandiene and Stanionis. But Rolavita’s future does face some challenges, among them rising taxes and increasing fuel prices. “Everything depends on Lithuanian politics,” says Stanionis. “Other companies are leaving Lithuania for Poland or Latvia. Prices are going up. Salaries, taxes, insurance. It’s cheaper to run your business in Poland or Latvia.”

COVID-19 has also brought its own set of issues. “Five out of seven of the trucks we had at the time were sitting at home with nothing to do for almost two months,” says Stanionis. “What can you do? I don’t know how we managed. It was the hardest moment in all of our eight years in business. I can’t remember anything worse.” As the initial shock of the beginning of the pandemic wore off, the logistics industry began to stabilize, and Rolavita’s workload slowly crept back to normal.

Rolavita celebrated its eighth birthday in 2021. After working their way up from one truck to eleven,Tribandiene and Stanionis believe that they are well-equipped to face all the challenges the future may bring. They’ve saved a lot of time and resources by chartering much of their fleet with sennder, which has allowed them to expand their business to include most of Europe.

The Lithuanian trucking industry can feel precarious at times, but Tribandiene and Stanionis feel more secure knowing that they have chartered so much of their fleet with sennder.

“We bought three new trucks this year,” says Stanionis. “This is shaping up to be one of our best years yet.”