Blog How to launch and grow a leading digital platform: The history of sennder

How to launch and grow a leading digital platform: The history of sennder 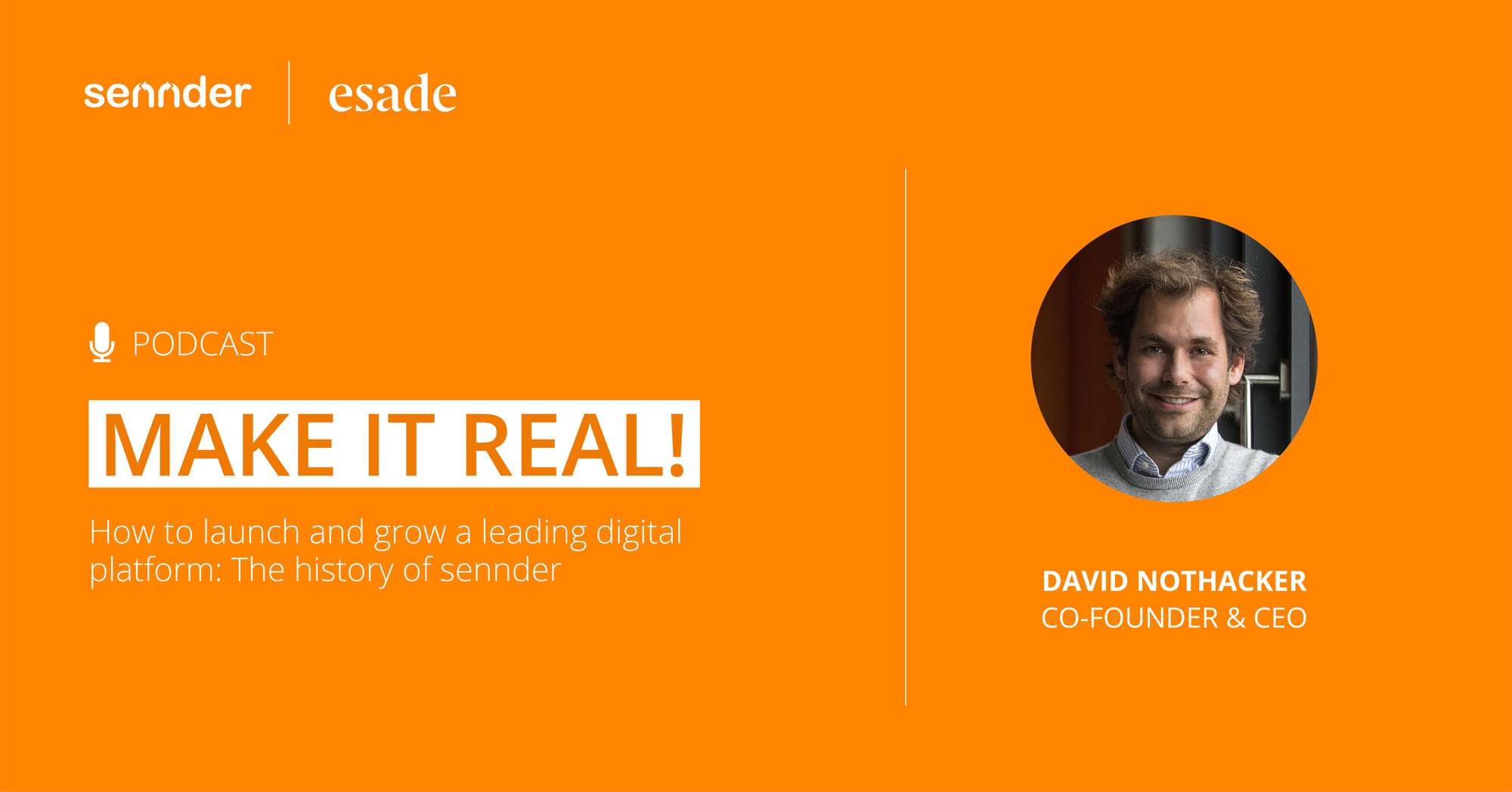 David Nothacker, our co-founder and CEO, was a guest on Making it Real - For Founders that Take Action. The Making it Real podcast is hosted by Dr. Jan Brinckmann, a professor at Esade, and features interviews with successful founders.

In the podcast, David discusses sennder’s history, how to build a great team, and the importance of product market fit. You can listen to the full episode by clicking above or going directly to the episode page here.

David’s answers have been edited for length and clarity.

sennder got started more or less by chance. While I was doing my MBA I did a project for the founder of BlaBlaCar. The idea for sennder came out of that project. I kept working on the idea all throughout my MBA, and when I graduated I thought I had figured out everything and moved to Berlin to start the company. It took me a full year to realize that this first idea didn’t work. Why? We didn't have a single customer.

I found an angel investor, and then my first cofounder exited quite literally ten minutes after we had just signed the term sheet. My chair was still warm from the three-hour meeting with the investor. It was a difficult time for me. The investor was investing in us as a team. We had no business yet, no revenue. I knew that if we told the investor what was going on, he’d say no, which he did initially. That meant we didn't have any money left, so my next step was to learn how to file for bankruptcy.

I called my dad and explained what was going on. He said to try one more thing. My father is my role model. He taught my brothers and I how to handle risk and uncertainty. If I come up against problems I don't know how to address, he's the one I call.

So my dad suggested that I reach out to the investor again, explain the situation, and tell him I wanted the money. I had nothing to use, and I’d invested so much time in the entire project. Eventually, I did manage to convince the investor to take a chance on me and then got back to Berlin with the money on the way. I called Nico when I got to Berlin. I met both Nico and Julius doing an internship in management consulting. We were all sitting in the last row at an onboarding training session, and we stayed in touch.

So I told Nico that I had €500,000 coming my way, I had a couple of ideas, and I was looking for a co-founder. I don't know why he said yes, but he did. I had one condition, though. I was living with my previous co-founder, and I needed to move out. I asked Nico if he had a place where I could crash for a few nights. And he asks if I remember this Julius guy...they were living together. They had a small room where they kept their shoes, but it had a window. I bought the cheapest bed at Ikea, €70, and moved in for a few nights, then a few weeks, then a few months. Then we got these big-brand customers and changed business models, and Julius joined us as a third co-founder five or six months later. We literally knocked on his door until he said yes.

Together, we pivoted to what sennder is now in 2017.

On how to set up a team that works well together

You have to find the right team. It's extremely difficult, almost as difficult as finding a life partner. I recommend that everyone, especially first time founders, start with a founders team. There are three of us on the founders team at sennder, and that worked really well because we always had a way to find a majority if we disagreed. I had known Nico and Julius for many years before we joined forces, and that also helped a lot. We’re still really good friends.

As long as you respect each other and respect each others' strengths, you have a really good chance at overcoming difficulties and achieving success. We had very tough times. But I think we all respected and appreciated and admired what we were doing, and it kept us together.

I learned two main lessons from the first two years. Firstly, you have to do your homework, and secondly, you have to check for product market fit for whatever you’re trying to develop.

The first year, I just assumed that the product market fit was there. I wanted to offer same-day parcel delivery across regions by using the empty capacity in buses, and then attaching a last mile service to that. We knew that Amazon and Zalando offer same-day parcel delivery to their customers, and other e-commerce companies need their own alternative. We were 100% convinced that the other e-commerce companies would have to react. But no one wanted to pay a few euros more for the delivery. There was no product fit. We didn't do our homework.

Then we went to a couple of these e-commerce companies and offered to do same-day delivery for smaller cities where they weren’t operational yet. They told us that the idea was too complex. But they saw in our pitch presentation that in addition to our partnership with FlixBus, we had small vans. We only had the vans as a backup for when the buses were full. But these e-commerce companies told us that they were looking for same-day delivery vans to move parcels from a warehouse to a city a few hundred kilometers away. All the other logistics providers these companies were already working with had told them that these small vans were only for regional last mile delivery, not for cross-regional line hauls. So we said...we can do that. Even though we had no idea how to.

We jumped into this new business model. After that second year of business, we realized that the small vans are nice, but there was another opportunity available: all those big big 40 ton trucks that you see on the highways. So we evolved the business model in that direction.

On growing sennder as a classic supply-and-demand platform business

It's always difficult to build a two-sided marketplace because you always need both sides to grow in a constant way. We already had constant demand from the shipper side, so we were lucky. You can’t guarantee luck, but you can influence it by grabbing opportunities when they come. This was a case of right place, right time, right people, and they said yes. We were trying to sell them something they didn’t want via our old business model - same-day parcel delivery. But they saw in our presentation that they could build something that they needed. This is how we pivoted and got our first big customer. These customers, these shippers, were big brands, and they had line hauls that needed to be driven every single day. This need allowed us to build the supply side, finding the trucks, or initially the small vans, to cover the demand. We built a carrier network by allocating loads on different weekdays to different carriers.

Having these big brand shippers also was what allowed us to grow internationally. We launched in France with a three-day turnaround because one of our biggest customers said they needed trucks in France. Back then, if that specific customer asked us to jump, we asked how high. So, they want us to jump to France? We’re there. We hired a French speaker who worked at a bar, and he moved his bar shifts to the weekend and spent weekdays helping us find trucks in France.

So we used the initial demand to build supply, and then we were able to use that initial supply to generate new demand.

Listen to David’s full interview on the Making it Real podcast HERE.