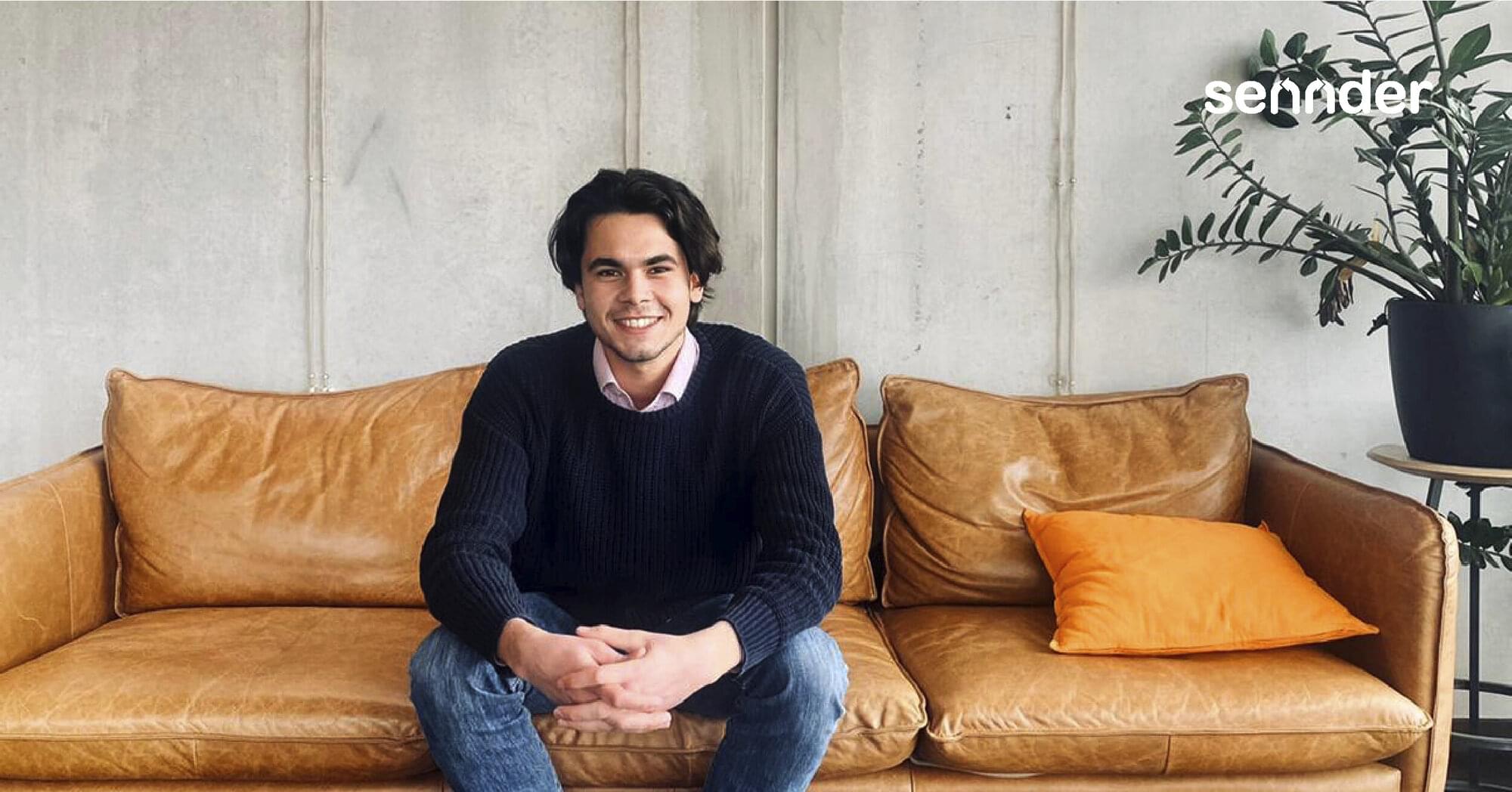 The operations strategy and planning team shapes the company’s operational strategy and implements the right processes and tools to reach our business goals. As part of the central operations team, the strategy-focused team coordinates the local operations teams across our seven offices, collaborates with a wide range of departments and leaders on cross-functional projects, and continuously improves the way we operate and transform the logistics tech industry.

What led you to Berlin?

Before moving to Berlin, I studied in France, Singapore, and Munich. I graduated in 2019 with a business degree in innovation technologies and intercultural management. Next to my studies, I worked as a freelance consultant in marketing and strategy for startups in Paris. What started as a way to earn some side money quickly became an exciting way to understand the challenges early-stage businesses face in an environment where money and time are scarce resources. Over three years, I worked with over 25 startups for assignments of various lengths and I grew a strong interest in innovative business models.

In the last decade, Berlin has become a major tech hub in Europe. The city hosts a large number of thriving tech companies, so when it came time to think about my first career steps, Berlin was the immediate no-brainer and ideal decision.

And how did sennder get on your radar?

That I found myself applying to a logistics tech company was a complete coincidence. As a student and freelance consultant, I mostly worked with business-to-consumer tech startups and I was ready to try something new.

Though Berlin is a major tech hub, I was looking for a gem in the startup scene. I came across sennder and it made me wonder what road freight logistics is all about. When I heard about sennder the first time, I was intrigued by the way they made an industry I initially saw as off-putting and old-fashioned sound appealing, modern, and dynamic. This paradox piqued my curiosity. So I began my research to investigate further.

A friend of mine working at Forto, another freight forwarder, told me that sennder was a very credible company in the early-stage logistics field. He said, “if you’re looking for a credible company, follow the money.” And at the time sennder had just raised an incredible amount of funding, which proved to me that there was some real traction.

That led me to the website explaining the market approach, which made sense to me. The company was addressing big industry problems, from the non-digitized side of the business to the issue of 30 % of European trucks driving empty on the roads. To me, it seemed like a business that was addressing a variety of topics which concern many people, so there was a clear impact on societal topics.

I decided to apply for a job in operations because I wanted to grow into doing strategy so this seemed like an interesting starting point. Especially because it seemed to be composed of so many underlying market dynamics. It made sense to start in operations to understand the reality from within, be in contact with the stakeholders in the field, and use that as a baseline to advance into strategy.

Why do you think you were successful with your application?

Being fresh from business school, I think I showed that I understood the major trends and common threads of the industry. Despite my lack of experience in the logistics sector, I guess they saw growth potential in me that matched with where the company was at the time.

When you started, what were the most challenging aspects of the job?

I joined sennder as an account operations manager (AOM) in October 2019 and was responsible for a portfolio of customers, mainly dealing with fast-moving consumer goods. My daily tasks consisted of planning and operating the transportation loads of those customers in Europe.

In the beginning, learning stakeholder management in logistics was the most challenging part of my job. When you’re on the phone with shippers who have high-quality requirements, you have to be good at communicating and reassuring people. Especially when unexpected incidents occur, like truck delays, no-shows, cancellations, national strikes, etc.

External stakeholders can be extremely different. People working in central planning or buying units might operate very differently than the stakeholders working with loading the trucks in the warehouse. As an AOM you always have to make your points in the fastest way possible, because time is money, while taking the differences in your diverse audiences into account. E.g. how people in the warehouses, drivers, and dispatchers on the carrier side can differ from the various stakeholders on the shipper side. And I found that challenge very interesting.

What was surprisingly fun about your work?

After a few months, I started being comfortable with the daily tasks. I knew the product and my counterparts. I had reached cruise speed efficiency, which allowed me to think more about the strategic development of my accounts. When the Covid-19 restrictions became widespread, I saw an opportunity because, as a freight forwarder, we are an asset-light company. While some of my competitors had to think about restructuring their assets and basically figure out what to do with the trucks they couldn’t allocate, I doubled down on customer satisfaction. I was on the phone with my customers every single day and was able to ramp up the business quite substantially on my portfolio.

Though it was unfortunate that other companies were struggling, I was able to provide trucks for my customers. This helped me prove that I was a reliable and trustworthy touchpoint who committed to what I said and provided my stakeholders with as much visibility as possible. Regardless of those stakeholders being shippers, carriers, or carrier managers within sennder. And eventually, it paid off.

How did you start transitioning into an operations strategy and planning analyst?

Based on my performance numbers, I was a high-performing AOM for a couple of months. I was able to turn things around in some critical accounts, which ended up being some of the most profitable accounts in the company. So even though I had been in the company for a short time, I was able to show that I have an ability to strategically implement solutions and challenge processes by recommending ways of improving. I think that made its way to our department's leadership.

Coincidentally, I was starting to feel the pressure of splitting my focus between selling solutions to my customers and operating my transports. I felt that I had growth potential that I did not get to tap into because I wanted to focus more on developing my accounts. Whereas if I acquired another 10% in volume, it also meant that I had 10% more trucks to operate and less time to develop my accounts.

So in late spring of 2020, I put together a strategic proposal for operations that recommended separating the selling and relationship building part from the operational part of the AOM role. The main point was that if one person focused on the daily operations and management of the trucks, another person could focus on sales and building relationships with the customers. But before I even got to present it, I was offered to move into my current position, which I accepted.

The funny thing is that my first assignment was to restructure the way AOMs operate. Now I am actually in the process of rolling out that plan, which is bringing me full circle almost 18 months after starting at sennder. From seeing the daily bustle of the AOM setup to now working on a big organizational cleaning project of the operations department.

What do you personally find fulfilling about your work?

I still feel a connection to all the local ops teams because it wasn’t so long ago that I was working and firefighting with them on a daily basis. And now I've been given an amazing chance to improve their daily work and implement procedures that are more sensible. Basically, making their lives easier and providing them with clearer career paths as well. That is an incredible opportunity that I am really glad to have, though it also puts a lot of pressure on my shoulders.

So, what are your career goals now?

I have absolutely no clue. I just go with the flow and so far that has been a good strategy for me. It doesn't mean going blindly into things and wander around but means being a good listener and trying to understand where people want to take me. I think it is super important to be open to what people can offer you because any social interaction is a two-way street. In my case, by being a part of this professional work environment, people listened to what I had to say and put me in a position where I can speak up even more. So I am always trying to focus on what the next step will be from where I am by challenging myself the same way I challenge processes in my work.

What would you say to someone who is joining the AOM team today?

I'm just so glad that the bet I took on starting in operations paid off. I think that many people who graduate from business school focus on job titles rather than growing with a company. And I chose a company before I thought of titles. I figured that regardless of what I would be doing, the first position would allow me to advance to something else. And that's what happened.

To new AOMs, I would say that while you're dealing with your many stakeholders and stressful situations, keep your head cool and respect everyone you interact with. Even the people who can be difficult to interact with. It only takes one minute for you to burn bridges, but that can impact you for the rest of your time in that position. On the contrary, always strive to follow our company's value of running the extra mile, which means to take ownership, and embrace people even when it's hard to do. But it will prove itself to be successful in the end because as people, I may be here for you today and you might be there for me tomorrow. When it comes to operations that means, that when things don’t go as planned, that stakeholders will be lenient with me because I was nice to them before. As simple as that. And ultimately, this results in better performance.

Just talk to people the way you would like to be talked to and always aim to save your stakeholders some time. They will appreciate and remember it.